The experience of VCD symptoms:

“I am getting a lot of spasms…and it’s really difficult”
Video provided by Dr. Joy Lee, Alfred Hospital, with permissions.

Vocal Cord Dysfunction  (VCD) can be defined as “involuntary and episodic closure of the vocal folds during inspiration which leads to symptoms of dyspnea, cough, dysphonia, and stridor”. Vocal Cord Dysfunction has been referred to by many different names in the literature. It is commonly referred to as “paradoxical vocal fold movement” (PVFM) or “inducible laryngeal obstruction (ILO)”. VCD is part of the spectrum of dysfunctional larynx which includes chronic cough, muscle tension dysphonia and globus pharyngeus.

VCD usually occurs during inspiration, but may also occur during expiration. It may be accompanied by a sensation of choking and suffocating, throat or chest tightness. Symptoms are often triggered quickly and resolve quickly once the triggering stimulus is removed.

VCD should be considered when other respiratory causes for symptoms are excluded or are insufficient to explain the severity of the condition.

There is no universal agreement on the definition or diagnosis of VCD and no standardised classification system. Some common subtypes described in the literature are:

The prevalence of VCD is difficult to estimate. It varies between studies and depends on the study population and setting.

The PVCDI assesses symptoms of throat tightness, dysphonia, absence of wheeze and triggering by odours as key features that differentiate VCD from asthma. A score ≥4 indicates a diagnosis of VCD (Traister et al. 2014).

To assess upper airway symptoms and treatment follow-up (Gartner-Schmidt et al. 2014). Score > 10 suggestive of abnormal upper airway dyspnea. Good reliability and discriminant validity reported, but has not been reported as a diagnostic tool and not specific for VCD. For access email: gartnerschmidtjl@upmc.edu

For the identification of laryngeal dysfunction and to monitor response to treatment (Vertigan et al. 2014). A score of <17.1 is suggestive of abnormal laryngeal function.

A symptom monitoring tool which is sensitive to changes in speech therapy (Fowler et al. 2015). A higher score indicates a higher probability of VCD, but has not been tested as a diagnostic questionnaire. The VCDQ can be downloaded here for clinical and research use. For additional permissions email: sj_fowler@hotmail.com

Laryngoscopy allows visualisation of the vocal folds during quiet respiration, phonation, exercise and during odour challenge. It is best when combined with a provocation challenge. Closure (either full or partial) of the true vocal folds is observed during inspiration and may occur more than 50% on expiration. Supraglottic structures such as the false vocal folds may also demonstrate medial and/or anterior/posterior constriction.  The larynx may appear normal at rest and provocation through irritant exposure or exercise is needed to observe symptoms (Halvorsen et al. 2017).

The videos below are of flexible transnasal laryngoscopy demonstrating A) normal and B) paramedian vocal folds during expiration, suggestive of VCD.

Typically shows normal expiratory flow, but the inspiratory limb of the flow volume loop may be flattened. May also indicate a reduction in FIF50 of >20-25% (Sterner et al. 2009, Kenn et al. 2011).

Using hypertonic saline, methacholine or mannitol. Mannitol has been reported as both a laryngeal provocation agent and bronchial provocation challenge agent in a small case series. The relationship between bronchoprovocation testing and VCD is complex and not completely understood (Tay et al. 2017).

Allows dynamic images that can be reconstructed to visualise movement of the anatomical structure (Ruane et al. 2014).

A step-by-step demonstration of a flexible transnasal laryngoscopy including a scent challenge, to inform a diagnosis of vocal cord dysfunction. Includes a brief overview on patient history, purpose of procedure and discussion of results with the patient. For more information click here. 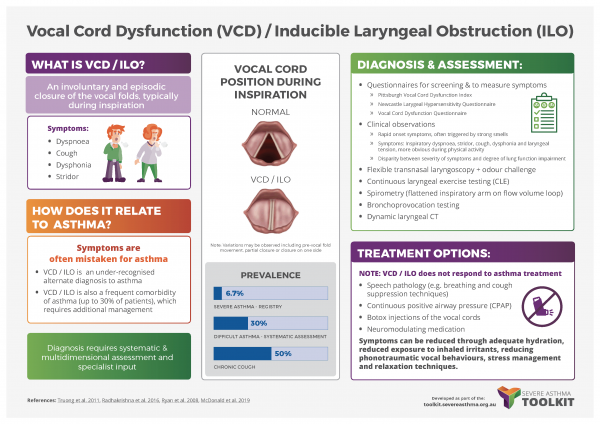