Indigenous Australians are nearly twice as likely to report having asthma, compared to non-Indigenous populations (AIHW 2020).

Between 3% (Hekking et al. 2015) and 10% (Chung et al. 2014) of all individuals with asthma are thought to have severe disease, based on international estimates. The number of individuals in Australia with severe asthma, including in the Indigenous population, is not known. However, several studies have shown that only 17%-60% of people with asthma have good preventer adherence, and only 10%-23% had correct inhaler technique. 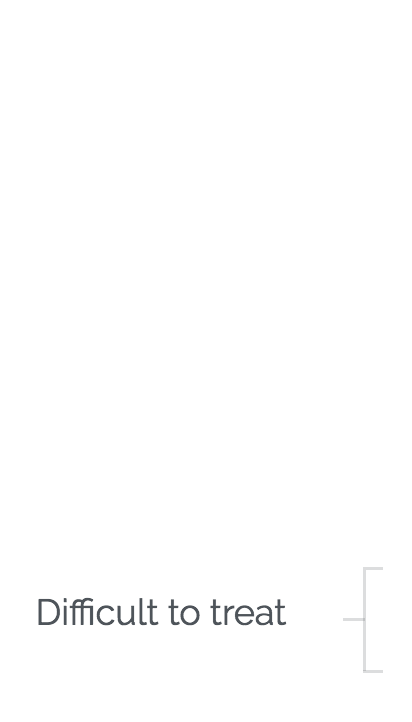 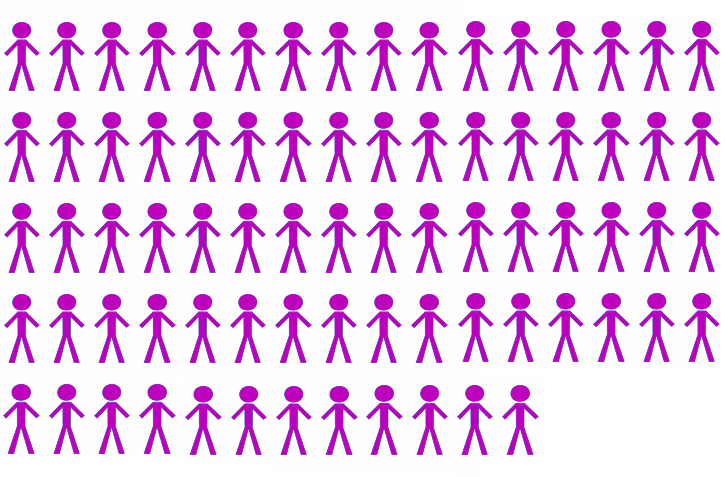 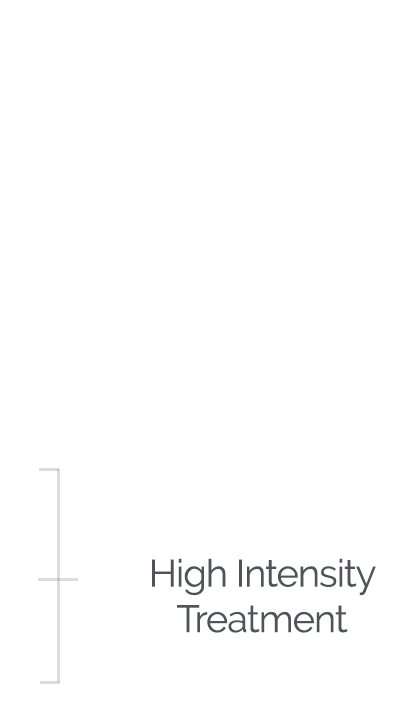 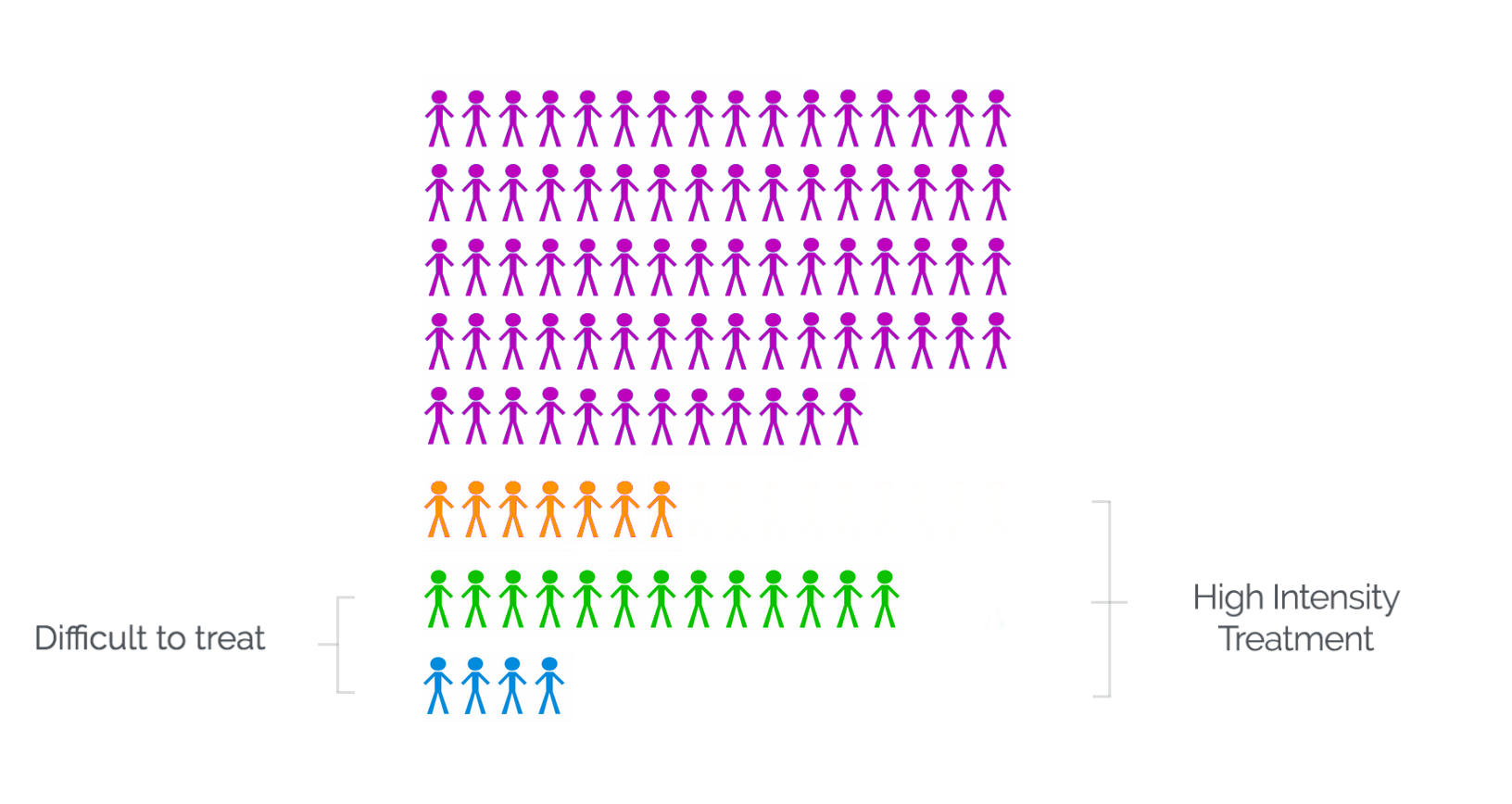 Figure based on data from the Netherlands (Hekking et al. 2015)

How many adult Australians with asthma have good adherence and correct inhaler technique?

The Australian Asthma Handbook gives practical advice about how to check adherence and inhaler technique in patients with uncontrolled asthma. If problems like this are found, they should be corrected before stepping up treatment or assuming that the patient has severe asthma. 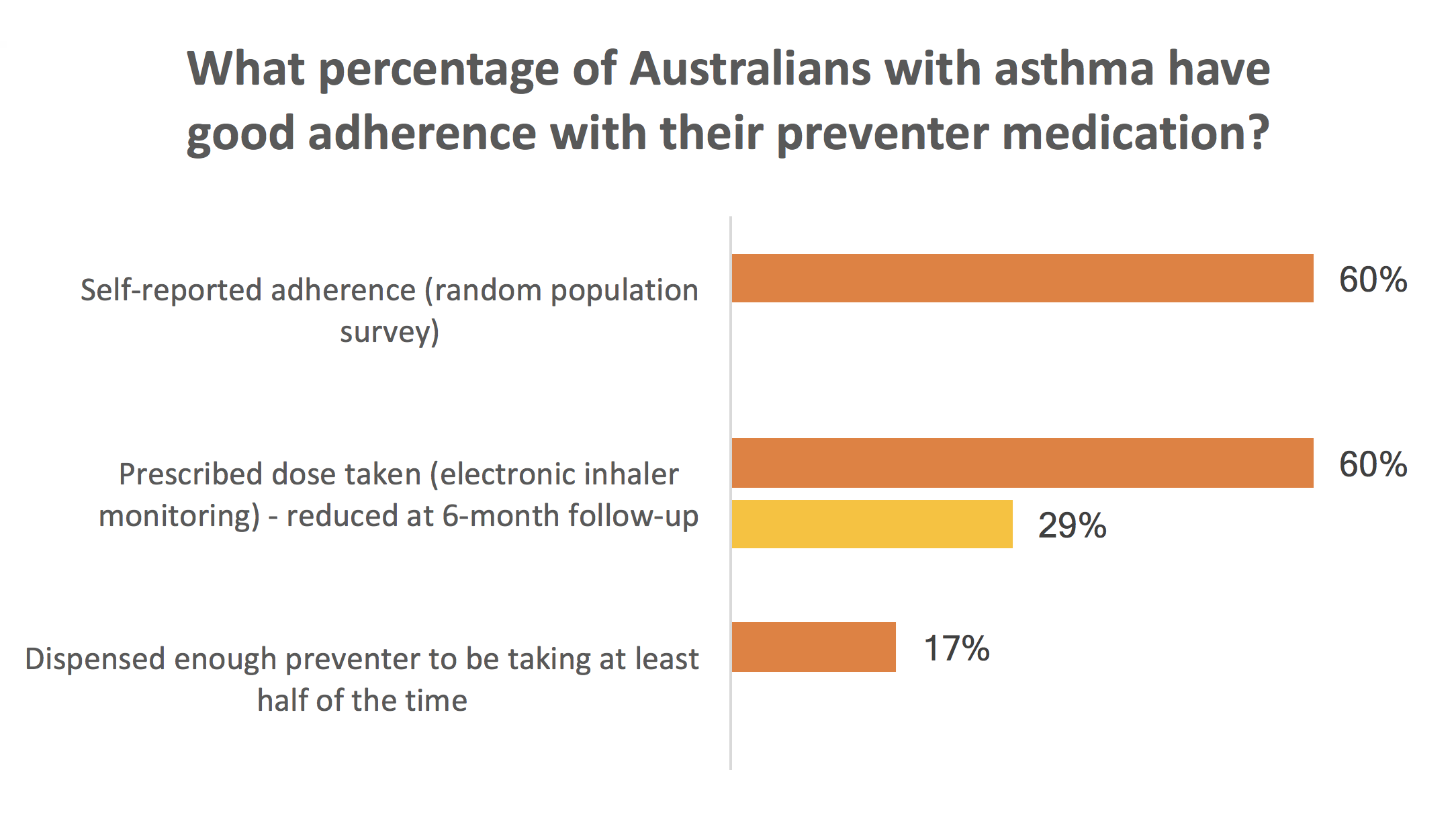 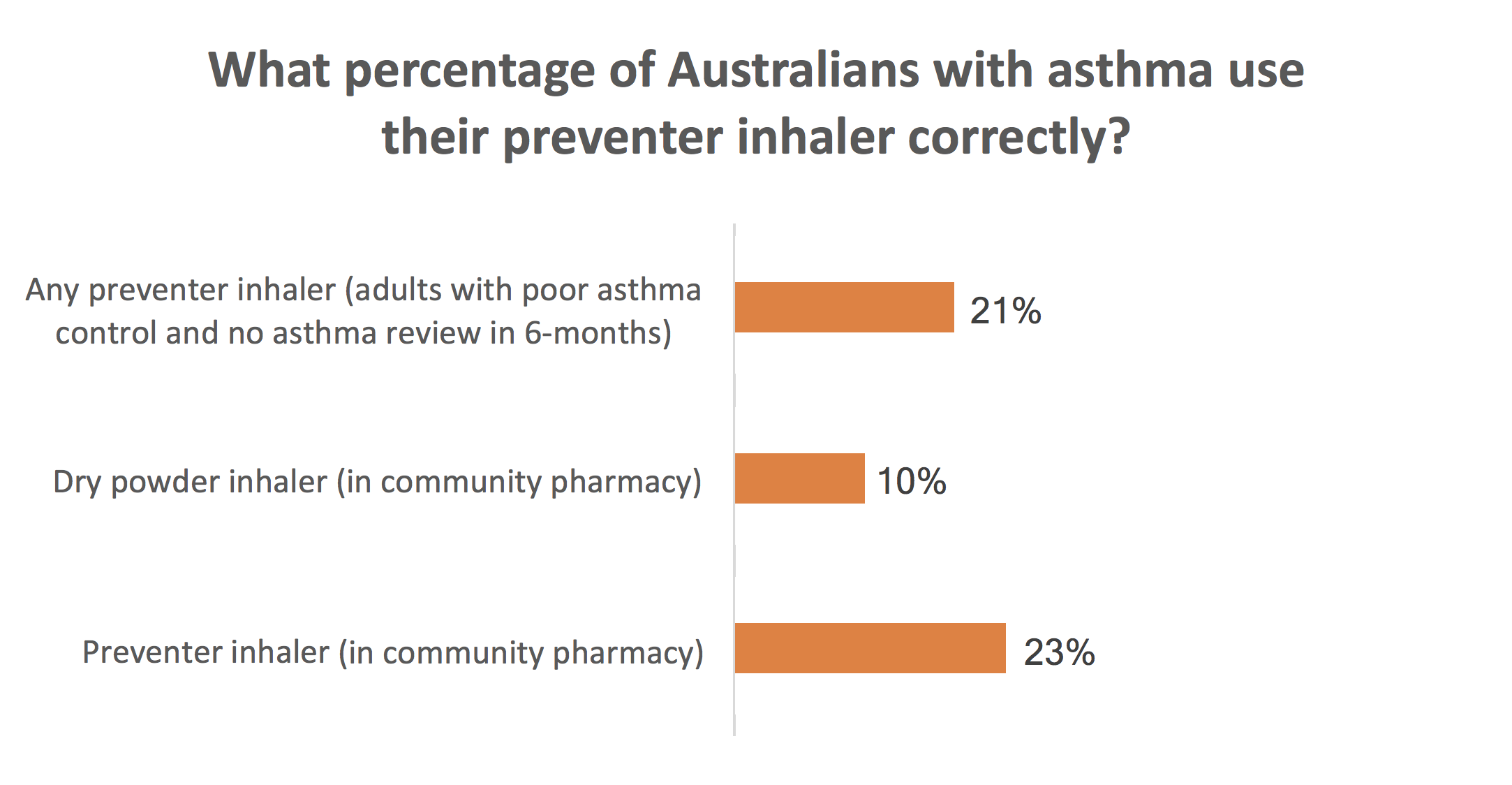 The Burden of Asthma

There have been significant advances in the management of and outcomes for people with mild to moderate asthma, but people with asthma still experience a significant burden of disease.

People with asthma can die from severe asthma attacks (severe exacerbations); around 15% of asthma deaths occur in people with apparently mild asthma (Dusser et al. 2007). Asthma deaths in Australia are among the highest in the world and are rising. In 2014, asthma accounted for 419 deaths in Australia, which represents 0.3% of all deaths at a rate of 1.5 per 100,000 population (AIHW 2020, based on data from ACAM). Further, mortality due to asthma is higher in Indigenous vs. non-Indigenous Australians, and is higher in people living in remote areas and those living in areas with lower socioeconomic indices (ACAM 2014, AIHW 2020).

People with asthma also experience a significant emotional and psychological burden, with a recent review finding this even among those with mild or moderate disease (Pickles et al. 2018). 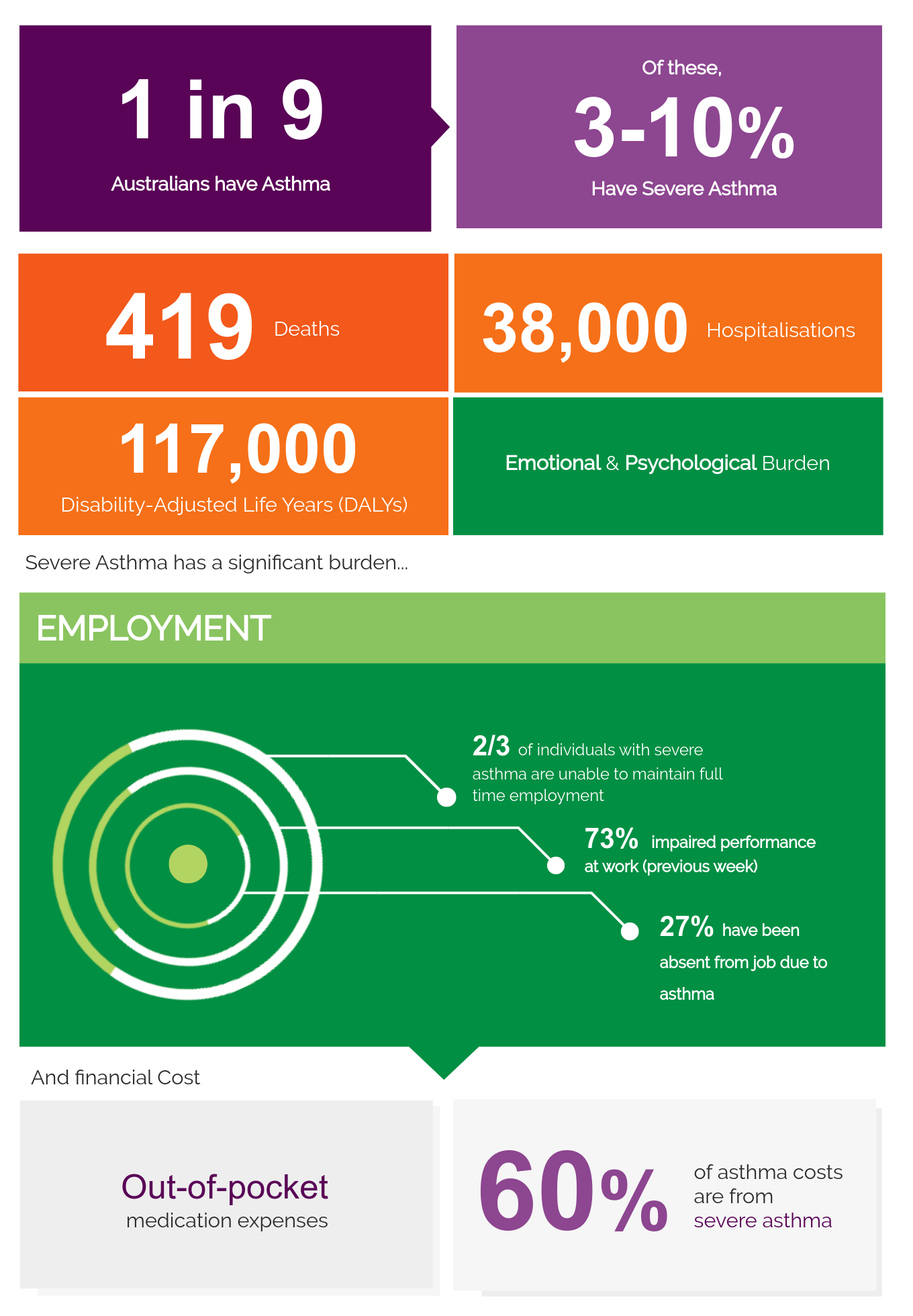 The Burden of Severe Asthma

Severe asthma is thought to account for a large proportion of healthcare expenditure for asthma, with a Canadian study estimating per patient costs for severe asthma as ten times that of mild disease and accounting for over 60% of healthcare costs due to asthma (Sadatsafavi et al. 2010).

The emotional and psychological burden of severe asthma is very substantial, impacting on daily activities, career, family and friends, and with high rates of depression and anxiety (Foster et al. 2017). Further, in the UK, ~2/3 of individuals with severe asthma are unable to maintain full-time employment (Heaney et al. 2010). In an Australian population, 73% of individuals with severe asthma report being impaired at work due to their health in the previous week and 27% have been absent from their job due to their health (Hiles et al. 2018).

What is Severe Asthma?

It is asthma that remains uncontrolled despite treatable factors having been addressed and maximal inhaled therapy being taken regularly.