Anxiety involves ongoing and disproportionately strong feelings of fear, worry or stress, which can happen out of the blue or in response to particular situations or objects. It also involves avoiding situations and objects that may cause fear or worry.

Depression involves ongoing feelings of sadness, emptiness or irritability. Below is an example of some symptoms associated with depression. 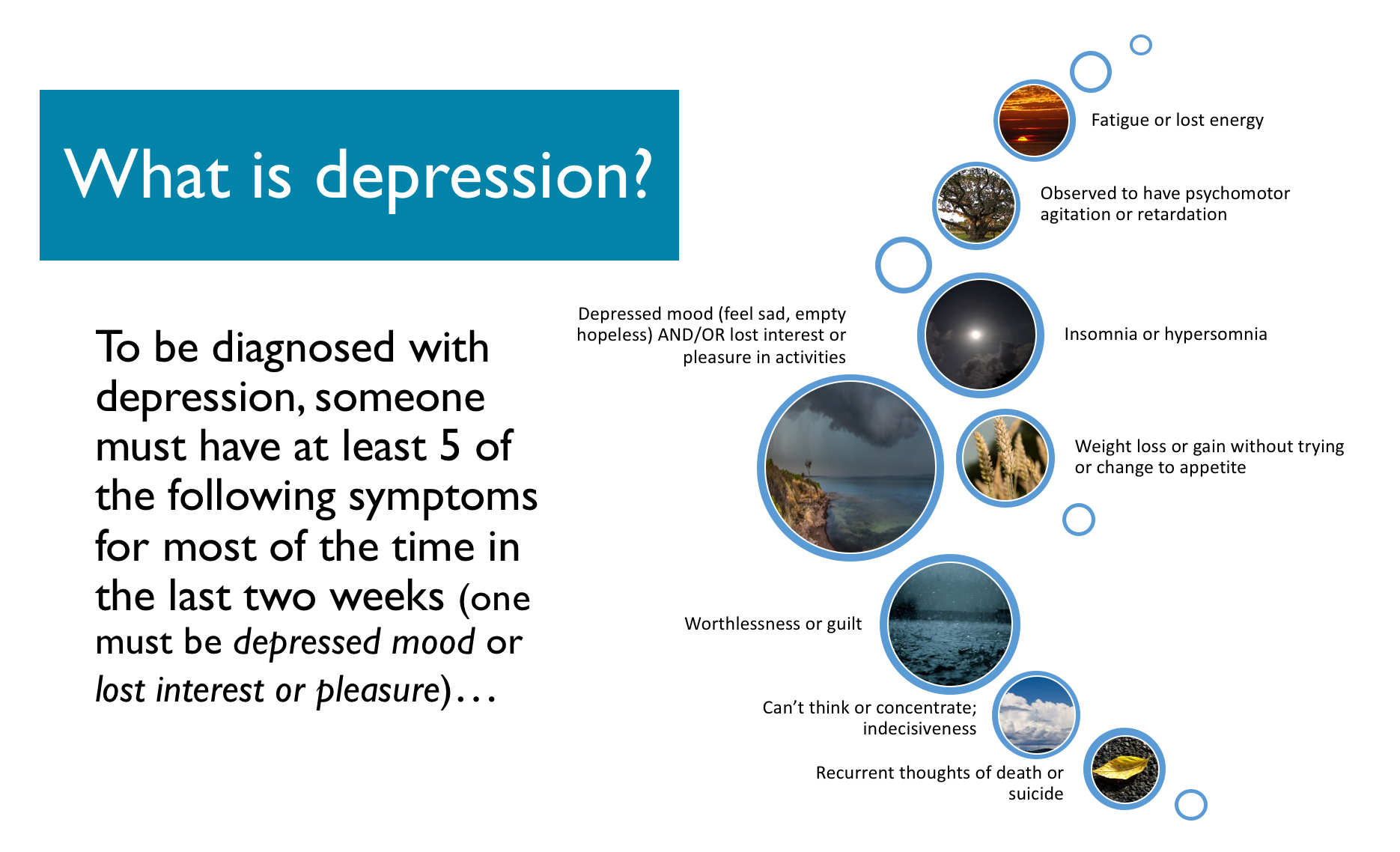 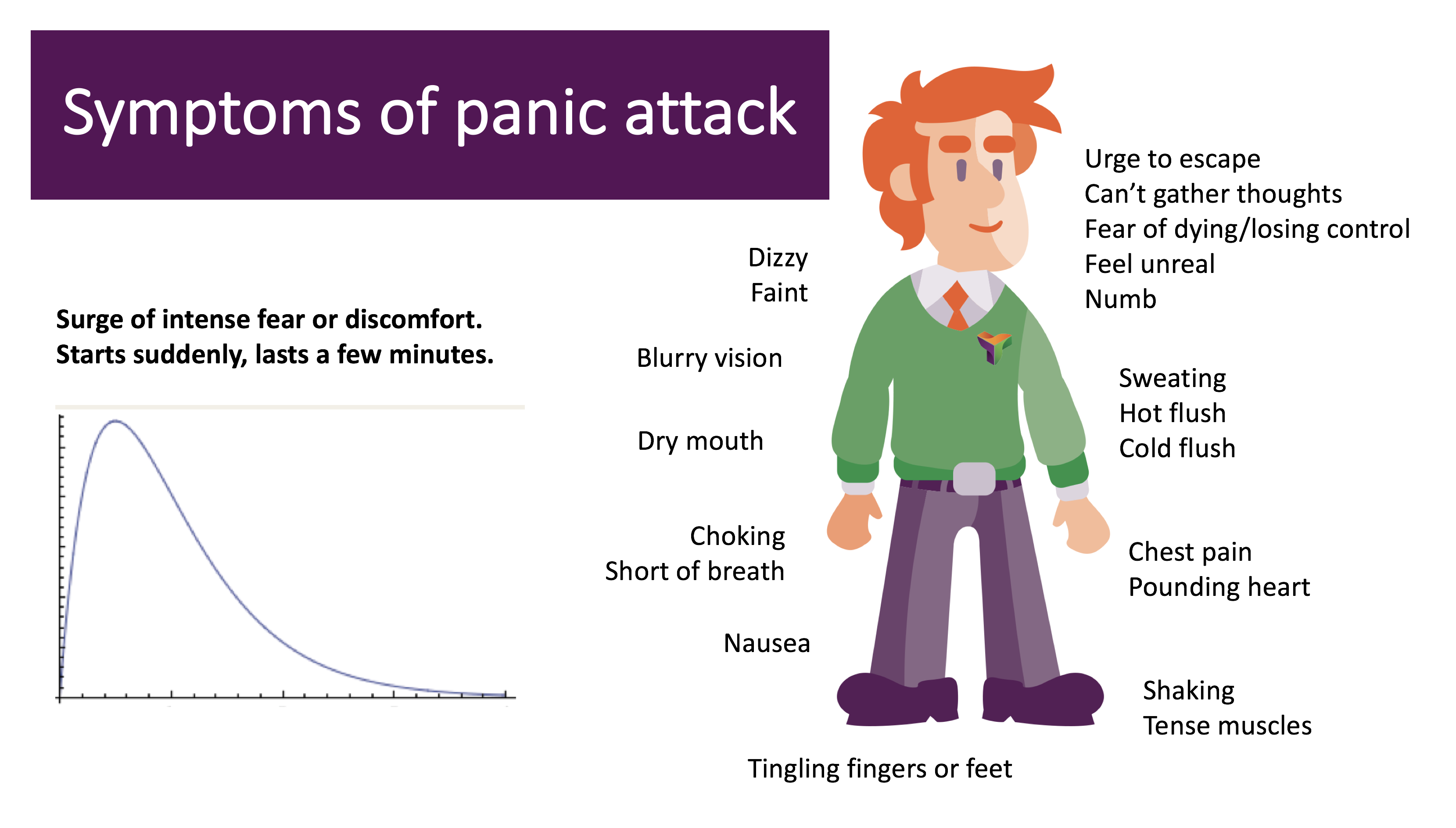 Symptoms of a panic attack can occur out of the blue or in response to a certain situation or object. Experiencing many panic attacks is known as panic disorder.

The prevalence of anxiety and depression in people with asthma varies across settings and countries. One in three people with asthma will have an anxiety disorder at some point in their lives, most commonly panic attacks (25%) or panic disorder/agoraphobia (12%) (Weiser 2007). In the general community, 12-month prevalence of different anxiety disorders is around 4-5% and depression is 6% (Scott et al. 2007). In treatment settings, the prevalence is much higher (Valença et al. 2006).

Across countries, estimates as high as 12.5% are seen for agoraphobia or panic disorder in South Africa and 25.5% for depression in Ukraine (Scott et al. 2007).

Prevalence of anxiety and depression in asthma worldwide, represented from (Scott et al. 2007)

What is the impact?

As shown below, anxiety and depression impact people with asthma and the community in many ways.

People with anxiety and depression are more likely to have risk factors associated with poorer asthma outcomes. These include smoking, poor self-management, reduced treatment adherence or overuse of medication, low physical activity, fear in response to asthma symptoms, higher body mass index, lack of social support, and negative thoughts and emotions, such as hopelessness or reduced self-efficacy (belief in your ability to perform tasks) (Bender 2006, Deshmukh et al. 2007, McCauley et al. 2007, Shaw et al. 2015).  Anxiety and depression may directly impact on lung function, which may increase vulnerability to exacerbation (Han et al. 2016). This may happen through panic symptoms such as hyperventilation (Deshmukh et al. 2007) or negative emotions such as sadness (Opolski et al. 2005).

How do we assess it?

Anxiety and depression are formally diagnosed after assessing an individual’s symptoms and impairment against specified diagnostic criteria and ruling out other possible causes of symptoms, such as other mental disorders or medical conditions (World Health Organisation, APA DSM-5 2013). Relevant to asthma would be to consider hyperventilation or dysfunction breathing as an alternative or co-existing diagnosis (Australian Asthma Handbook). The figure above indicated the symptoms assessed for depression diagnosis (APA DSM-5 2013).

Subthreshold symptoms that do not meet the formal criteria for diagnosis but are distressing and cause impairment are also recognised as important. 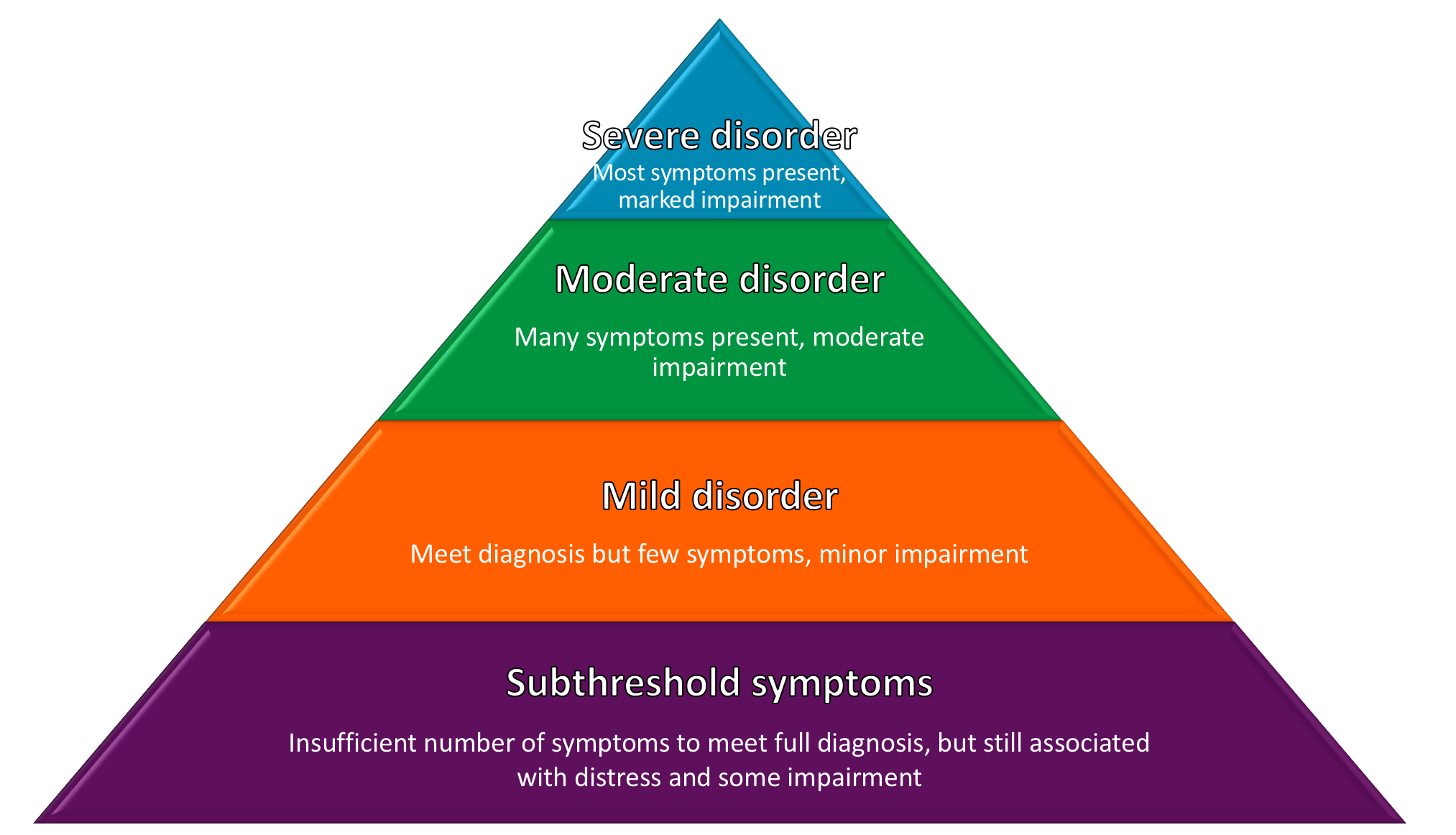 In practice, anxiety and depression are most commonly assessed through self-report questionnaires. Responses to validated questionnaires can describe symptom severity, increase the chance of detecting mental health problems, and can inform and evaluate treatment (Radhakrishna et al. 2017). Unfortunately, anxiety and depression are under-diagnosed and undertreated in people with respiratory disease.  A systematic review of asthma multidimensional assessment revealed that psychological health status was only assessed in two thirds of patients (Clark et al. 2017).

Screening for anxiety and depression in people with severe asthma is recommended and they are simple validated screening tools that can be easily implemented in the clinic.

Scales for assessing anxiety and depression

Examples of questions to ask

How do we manage it? 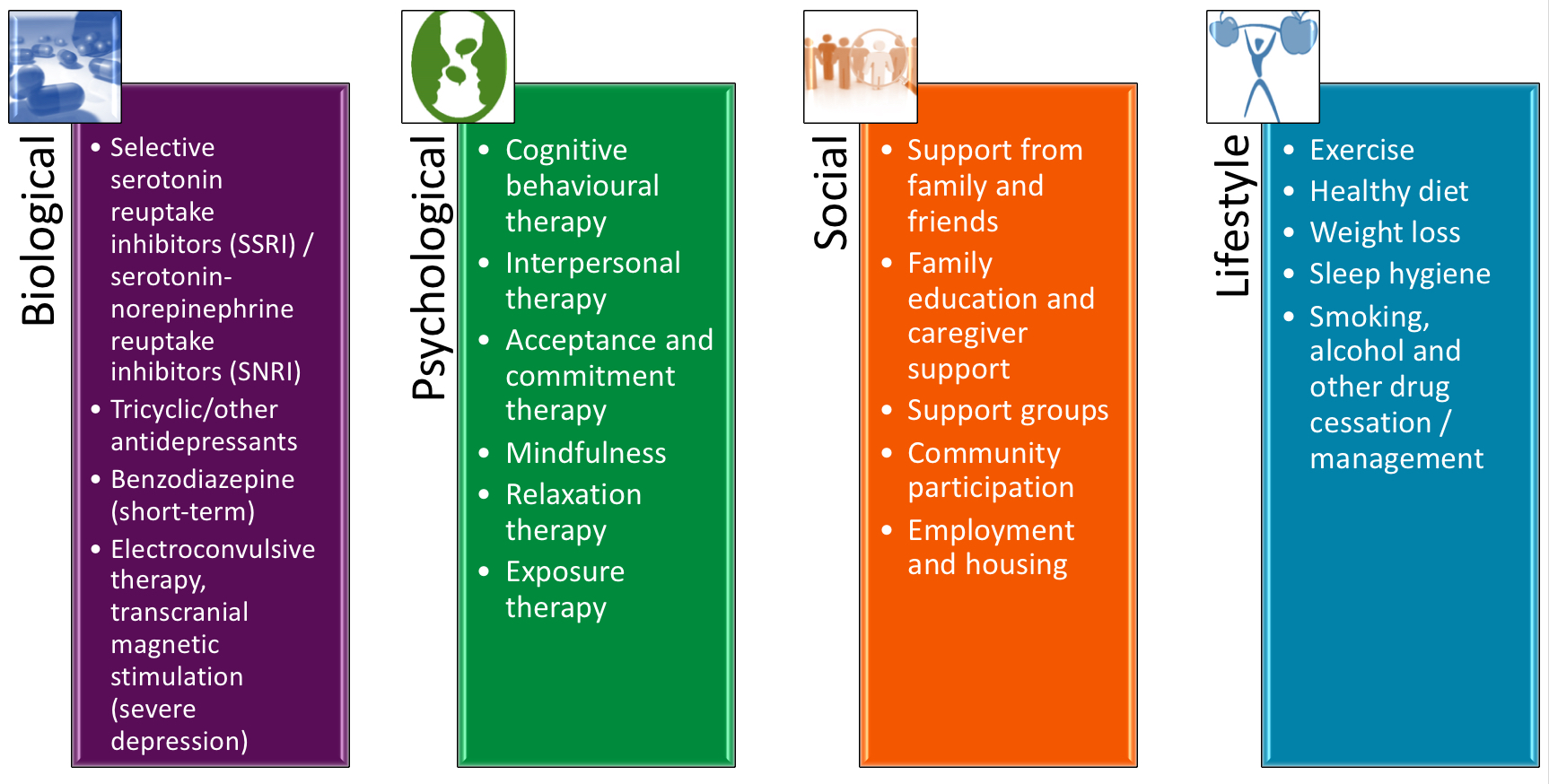 Psychological therapy or counselling services can be delivered face-to-face through specialist practitioners including psychologists, counsellors, social workers, psychiatrists and mental health nurses. Internet or telephone-delivered psychological therapies are also effective, either as a stand-alone service or therapist-supported service (RACGP 2015).

Some validated programs from Australia include:

People with anxiety and depression may also find benefits in engaging in physical activity, yoga, meditation, relaxation and healthy eating.

For people in crisis or at risk of suicide, there are 24-hour crisis counselling services available over the telephone or internet. In Australia, this includes:

Stepped care is recommended for managing anxiety and depression (NICE 2011, Malhi et al. 2015). The individual is offered the least intensive treatment that might relieve their symptoms and treatment is advanced to the next, more intensive, step if they do not improve. 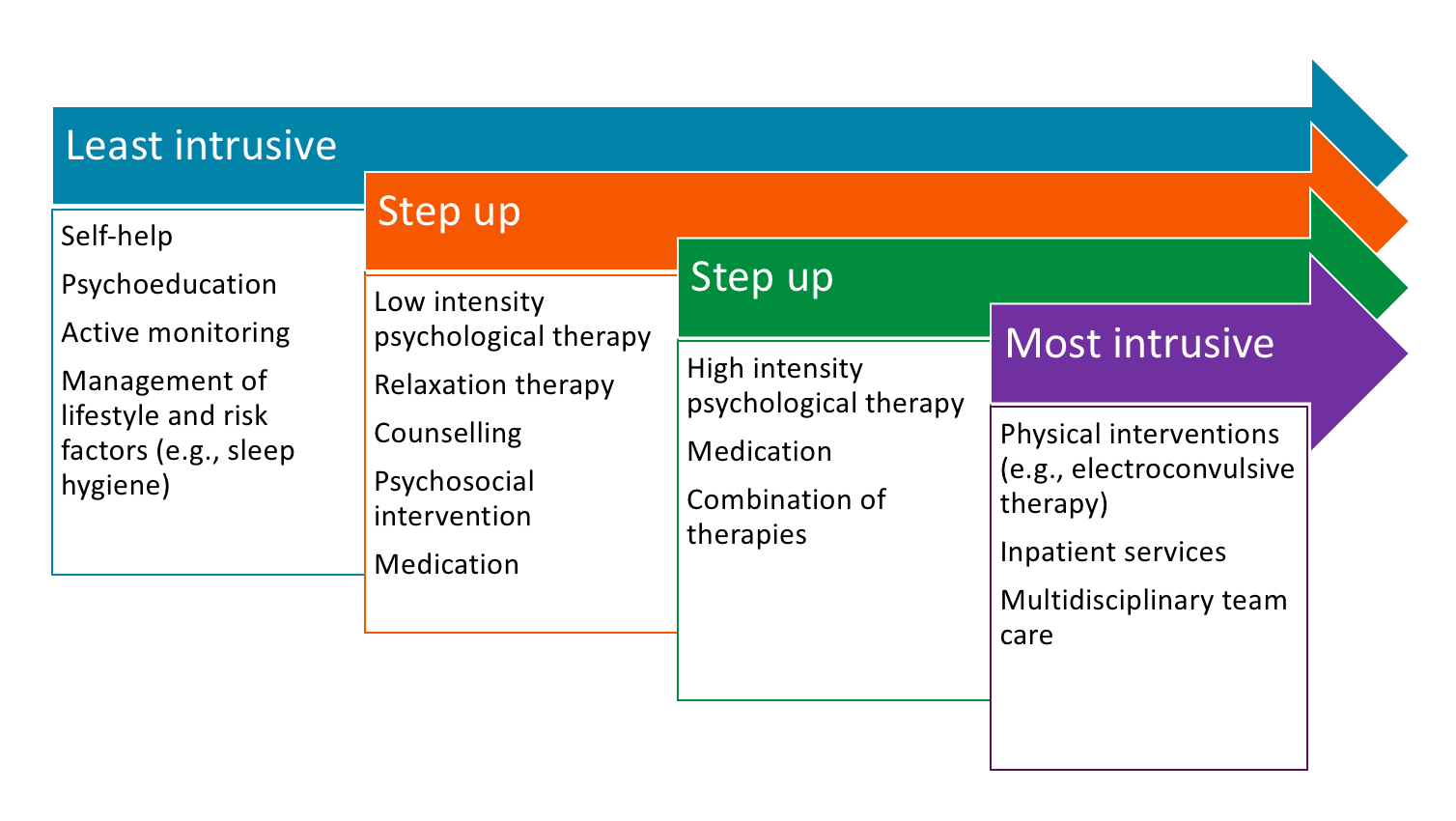 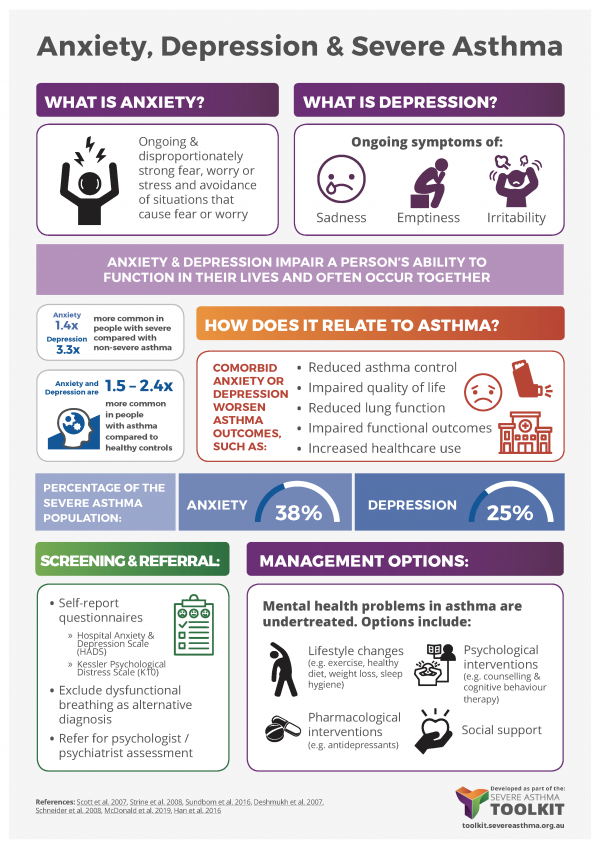